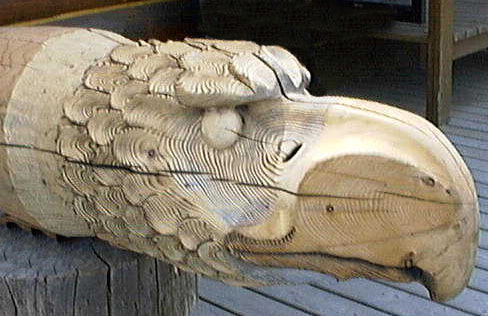 This Eagle purlin end was purchased by the high school in 100 Mile house.

"Loon and Heron" Pole was created for builder Peter Pocklington, for his demo home in Pemberton, BC.
It was mounted in an open style new home, amid fine wood floors,
​a black slate fireplace and black wrought iron banisters.
"Falcon Totem Pole" was a challenge, as falcons are not native to North America,
and so were not traditional birds depicted on poles.
The client raised Gyr Falcons.  We assembled images of natural falcons, eagles and ravens,
​and of Eagle and Raven totem poles, and we made extrapolations from there.